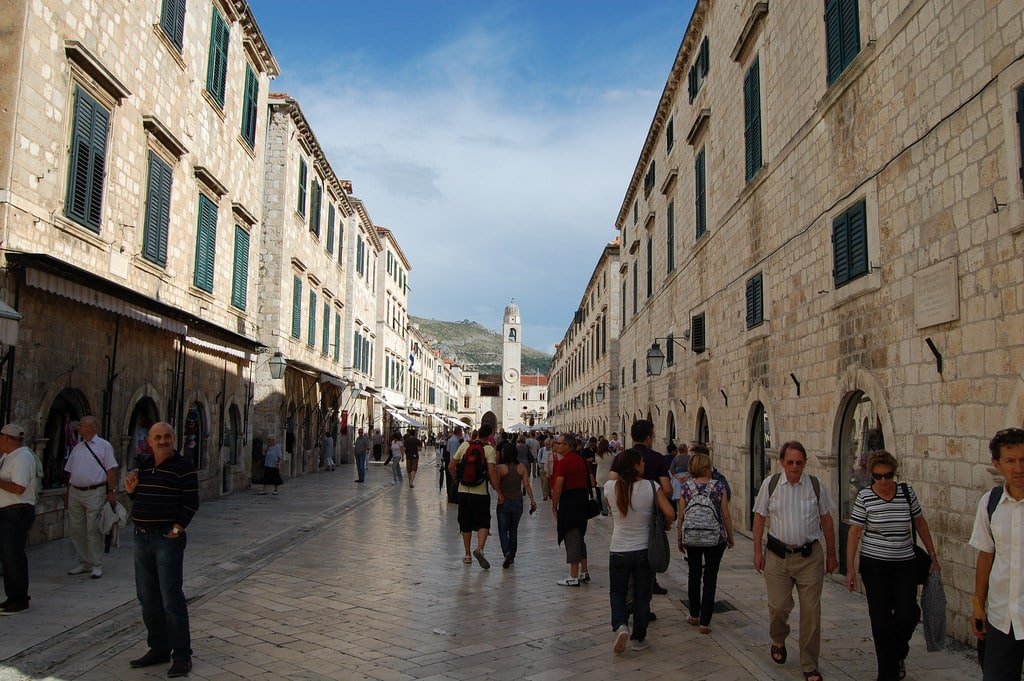 One of the most expensive thing that you are going to pay at Dubrovnik is a parking slot. If you want to find a free parking in Dubrovnik continue reading.

Parking for free in Dubrovnik may seem like an impossible mission.  Discover in our blog where we parked without expending a coin.

First of all, the roads of the Croatian coast are amazing for drivers.  Narrows, on one side a cliff and on the other a wall of the mountain.

It took us more than three hours, to do 220 km, from Split to Dubrovnik. Spectacular landscapes with narrow lanes and precipices to the right. The mountains reach the sea and the roads have been made by lowering the rock. They have built a highway but all the charm will be lost.

Where to sleep in Dubrovnik

We arrived about 13:30. At that time we met our landlord: Edi Macinko. He quickly organized us, Mari Carmen gathered with the suitcases and took them to his house, I followed him with the car to the only place where you can park free in Dubrovnik?and leave it in a safe place (at the end of the entrance you will find it). And my adventure began, two big boys climbed on a fifty-cubic centimeter bike without a helmet and this man driving like a teenager, passing between cars, getting on the sidewalk, in the opposite lane and at the same time greeting people.

When I recovered from the biker experience and I saw the room we closed the deal. When asked what we were going to do, he told us that we’d better stay another day there and see the neighboring country, Montenegro.

Map to visit Montenegro in one day, visiting Kotor, Budva and San Stefan. 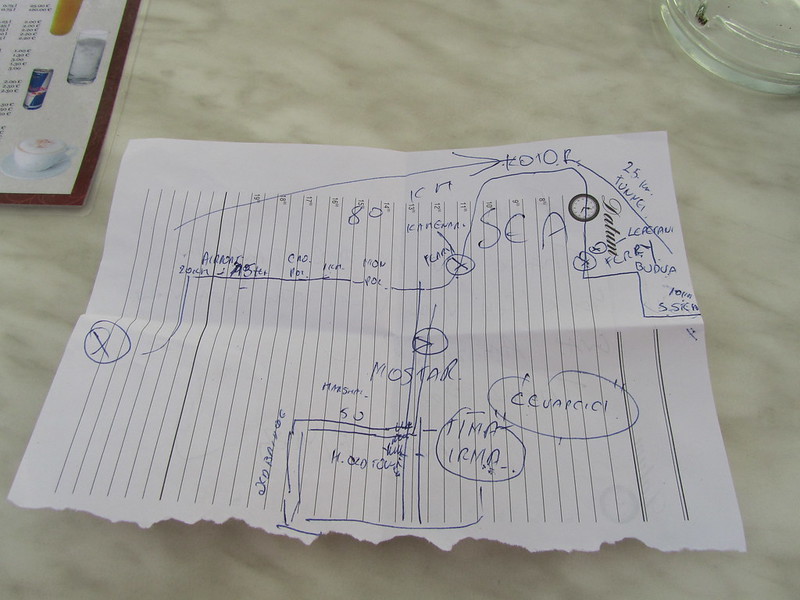 We let ourselves be convinced in a second.Edi is a character worth knowing, passionate about his work and his city.?In 5 minutes, he told us to see, where to eat and drink without leaving our money. He didn’t stop joking with us and offering to? help us with everything.

Another important thing, the Sobe (Croatian-style Bed and Breakfast) is 50 meters from the entrance of the old town of Dubrovnik, the place is unbeatable and if you’re lucky, you will get a room with a view of the sea.?In this link you have all the information: Eddie’s Sea View Rooms Old Town.

We drove to Montenegro the next day and there was free parking in Dubrovnik again at the same place.

What to see in Dubrovnik

The most characteristic of this world heritage, which is the city of Dubrovnik, are its marble streets and medieval buildings. It was an independent republic for many years.He was the first to recognize the United States as a country. The old Ragusa, is a fort with walls that run around the perimeter with a width between 4 and 12 meters, which can be traversed for 10 euros. 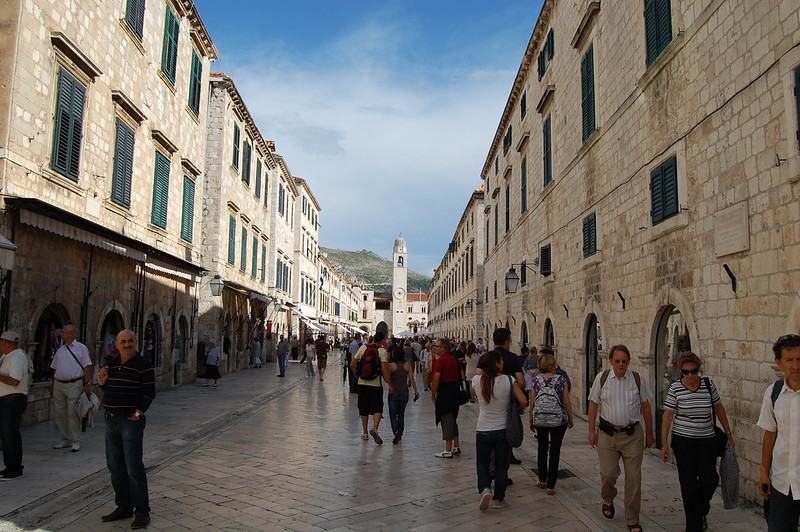 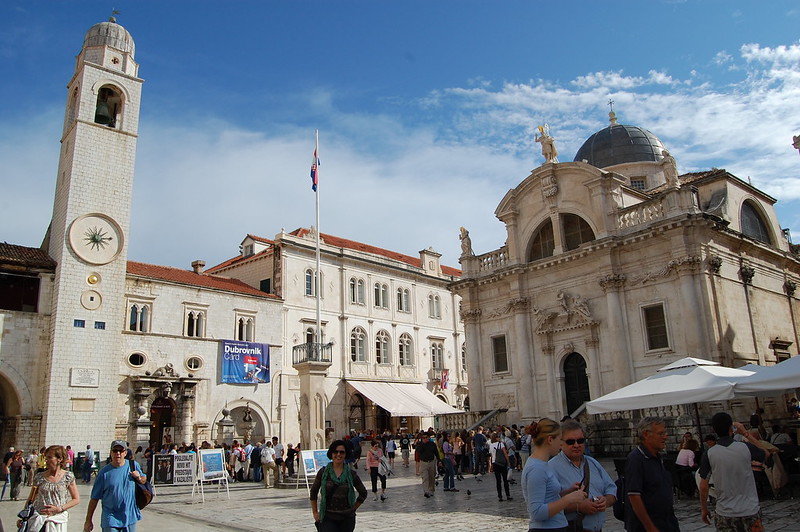 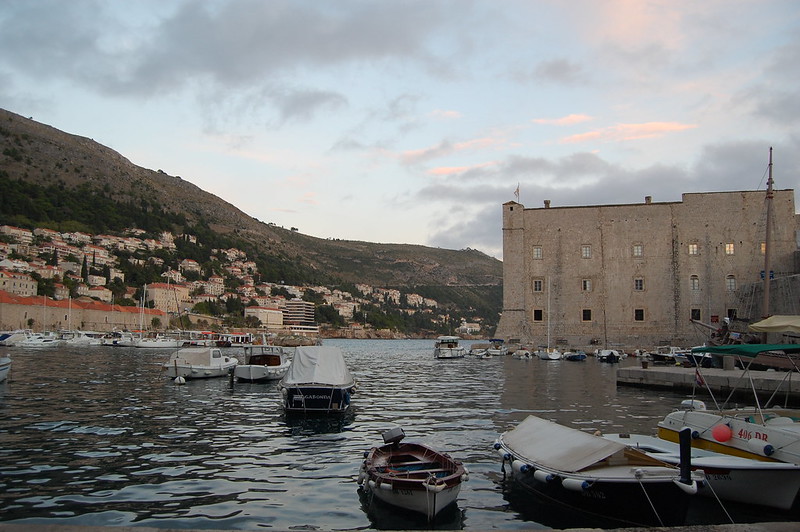 Inside there is a barbarity of bars, cafes and shops that make it look more like a theme park than a medieval city. Especially when it is full of people who visit it on a cruise. 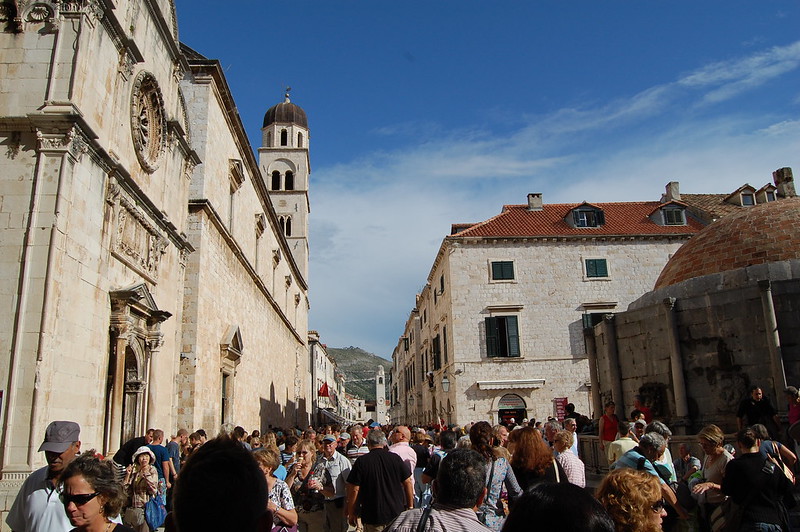 In the Sponza palace, 25 Kuna (2 euros) were blown to each, for seeing modern paintings and the palace courtyard (3 minutes). On one side, they have a room in memory of the people who died defending this icon of Croatia, in the recent Balkanian war. 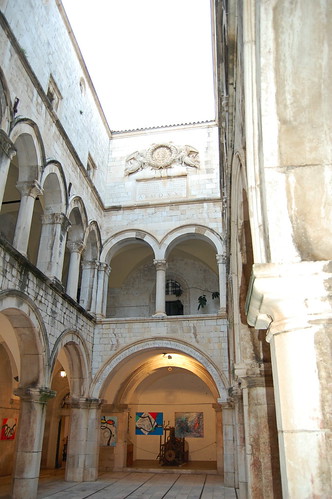 The Yugoslav army, supported by the Serbs, Bosnians and Montenegrins, spent two years bombing the called Pearl of the Mediterranean by land, sea and air. 384 damaged buildings and 111 direct hits against the walls.

Thanks to the private donations of the neighbors and the international help, it recovered its splendor. The dark roofs are what they had to rebuild. 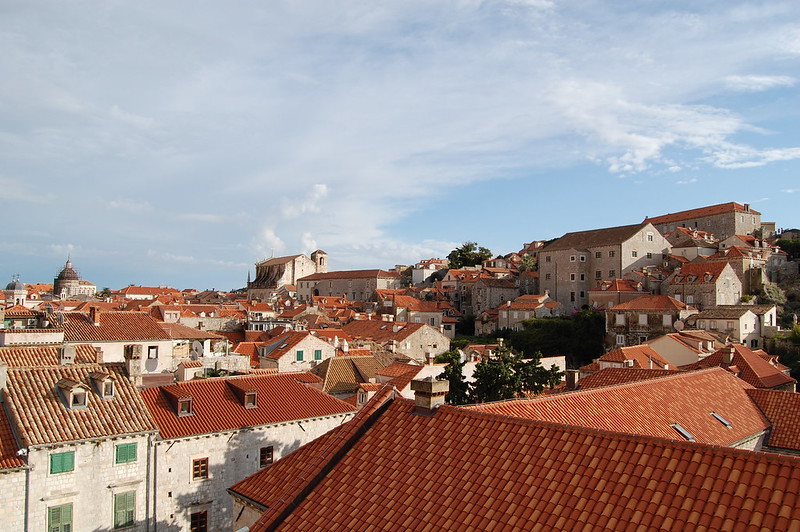 When Dubrovnik starts to get dark, the cruise passengers leave and the shops begin to close, at that moment if you look like you have gone back 500 years. The sunset from the Buza is beautiful, a bar of drinks on the rocks that are under the walls. Then take a walk among the narrow streets and the tall rock buildings. A wonder difficult to match.

Photo from inside the walls 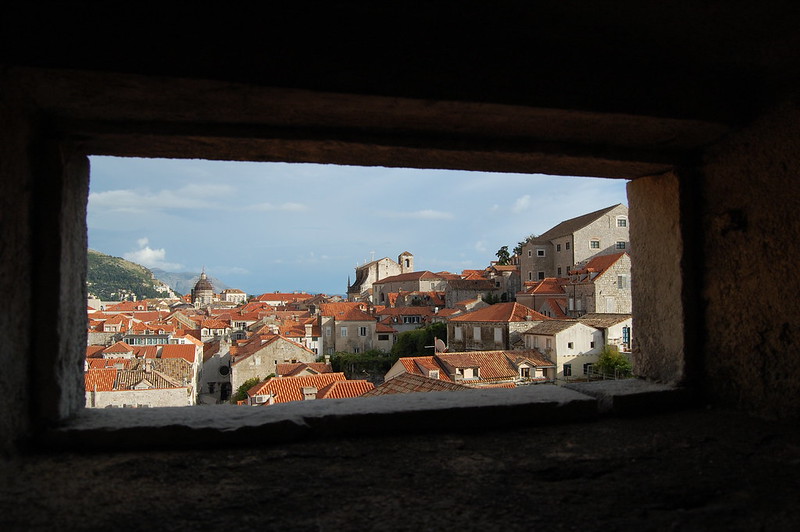 We have not yet adjusted to the schedule that they have here. We wanted to eat fish but when we arrived at the restaurant at 10pm they were closing.?We ended up eating pasta: Manmely spaghetti with Pesto and Tortellini with gorgonzola cheese and nuts for me. 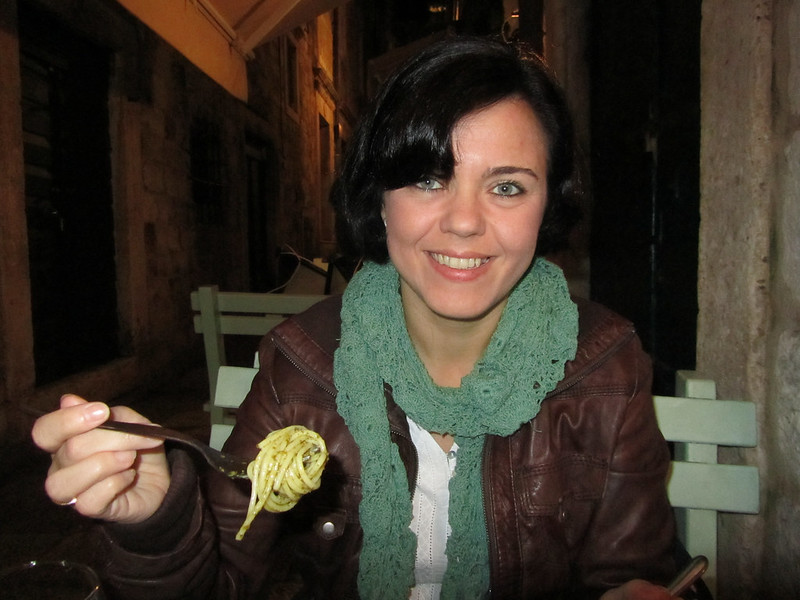 In this small city, the only (almost) thing you can do is walk through its streets and enjoy the buildings that make it up. Nothing more than that is worth the trip for.

We ended the evening talking with our families on Skype using the free Lacoste Hotspot. Teaching them the main street of Dubrovnik with the mini laptop webcam. 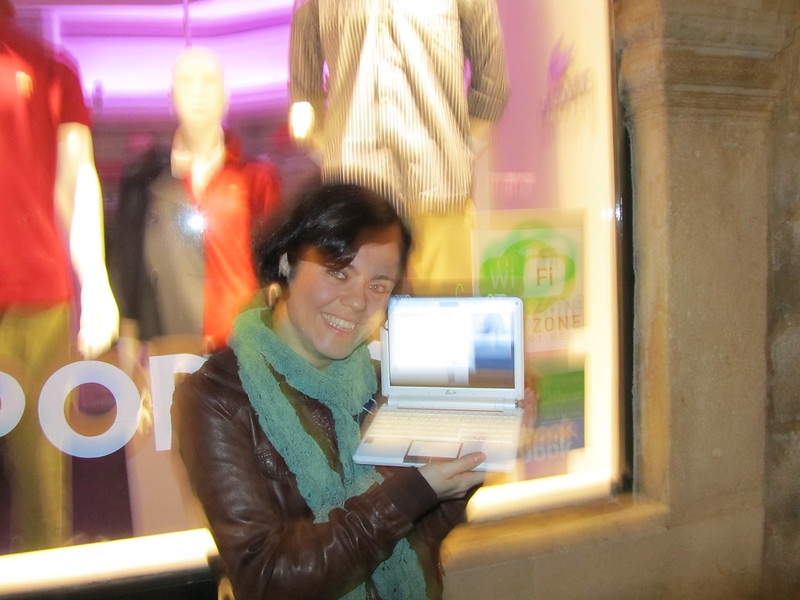 If you are a Game of Thrones fan,  you can take pictures of the red fortress that appears in the series or Lovrijenac in Dubrovnik for those who are not. 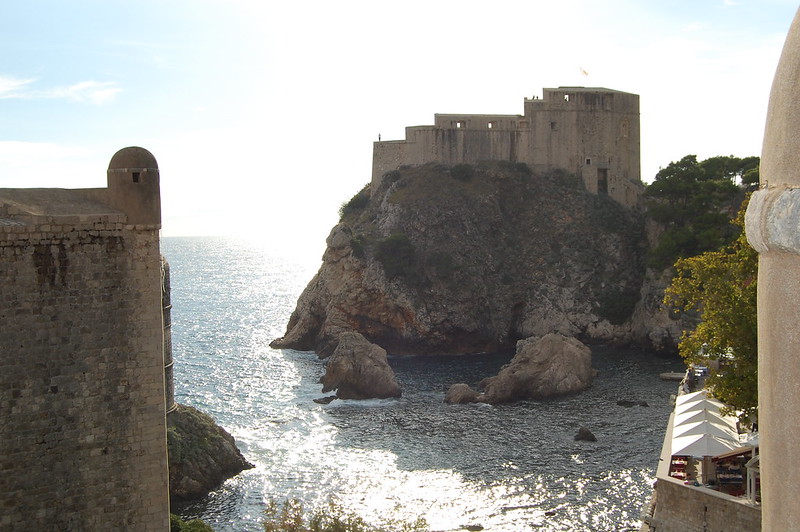 Free Parking in Dubrovnik is…

Behind a Supermarket Maxi Konzum next to a Gas Station.

If you want to read in Spanish: Aparcar gratis en Dubronik.

Tricks and tips for saving money traveling at our Cheap Traveling page.

9 thoughts on “Free Parking in Dubrovnik and what to see”

This website uses cookies to improve your experience while you navigate through the website. Out of these, the cookies that are categorized as necessary are stored on your browser as they are essential for the working of basic functionalities of the website. We also use third-party cookies that help us analyze and understand how you use this website. These cookies will be stored in your browser only with your consent. You also have the option to opt-out of these cookies. But opting out of some of these cookies may affect your browsing experience.
Necessary Always Enabled
Necessary cookies are absolutely essential for the website to function properly. This category only includes cookies that ensures basic functionalities and security features of the website. These cookies do not store any personal information.
Non-necessary
Any cookies that may not be particularly necessary for the website to function and is used specifically to collect user personal data via analytics, ads, other embedded contents are termed as non-necessary cookies. It is mandatory to procure user consent prior to running these cookies on your website.
SAVE & ACCEPT